”Present United squad can challenge and best any club”- Maguire

Manchester united kicked off the restart of the premier league with an away match with Tottenham hotspur on Friday night where the reds came out with a 1-1 draw thereby seizing a point. 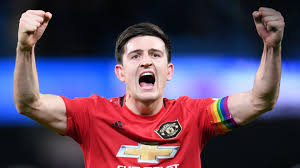 The ‘Red devils’ captain Harry Maguire had some good news for the press !
When asked if home advantage is lost without fan, Maguire told UNITED REVIEW:  ” Maybe it does take away the home fans making the atmosphere uncomfortable for the away, but it’s still about the 11 players who turn up the day .”
“As it is right now” The England international continues ” There is enough talent in our squad to go and beat anyone. we’re fully focused on ourselves and are not looking at it in being home or away. We’re just seeing every game as a chance to try to get the three points and perform at our very best”. he told UNITED REVIEW.

Manchester united has managed to find itself at the fifth place of the premier league table with two points ahead of Sheffield United who are yet to play their game against Newcastle which will be on Sunday (today) 21st of June.
Against Sheffield United, Manchester United produced three goals but they weren’t enough to seal the win for them as both came out with a 3 – 3 draw when  Oli Mcburnie for Sheffield fired in the equalizing goal on 90 minutes.
Maguire hopes they can avoid a repeat of such performance come Wednesday when they meet with Sheffield again.
” It was a crazy game, we were really poor in the first half ,” he added.
“No doubt about it, it was one of our poorest first halves of the season so far. we managed to find ourselves two goals down but then got in a great position and looked like we were going to win.
The didn’t create any chances in the last 20 or 30 minutes of the game and then, obviously with the last kick, they found space and it was a brilliant finish from Oli McBurnie. In the end, it was a tough result but I don’t think we deserved any more on the day than a point. We weren’t good enough and know we have to perform better in this game”.

” YOU CAN’T DO MIRACLES ON YOUR OWN !” – Cristiano Ronaldo sister lashes out on Maurizio Sari, blames his tactics.

“Marcus Rashford, I have to say, I couldn’t respect more what you did, it’s unbelievable. – Jurgen Klopp

"Marcus Rashford, I have to say, I couldn't respect more what you did, it's unbelievable. - Jurgen Klopp